Central Wheel Components (CWC) are celebrating 5 generations of the same family owning and running the Company over the past 3 Centuries. 2017 saw the company celebrate its 120th anniversary.

CWC may not have invented the wheel, but we have built and restored it many times since its inception. In fact, since we started in 1897, we’ve built motorcycle wheels for every motorcycle - from Adler to Zundapp, with bikes named with every letter of the alphabet in-between.

We currently produce all the spokes for Norton Motorcycles and we rebuild all the spoked wheels for The National Motorcycle Museum and Sammy Miller Museum. Both museums use CWC because of their requirement for the highest quality workmanship.

Until 2007, when they relocated their cruiser factory to Thailand, we supplied Triumph Motorcycles with up to a thousand spoked wheels a week.

With 120 years of trading under our belt, we have amassed a vast amount of knowledge and expertise and consider no job too small or too specialised for our skilled workforce.

For the past 40 years Central Wheel has supplied customers with a tyre or two. Demand grew rapidly and 20 years ago we established Wheel House Tyres as a wholly own subsidiary of CWC.
The operation started at Station Road but quickly outgrew the space available. A move and a tenure on a local industrial estate saw WHT move again to its current location at the rear of “Bikers World” (another early subsidiary of CWC) in Water Orton (some ¾ mile from the CWC location in Coleshill).

WHT is run by Mick Cheneler one of the most knowledgeable men in the tyre industry and his staff of 6 highly trained and multi skilled mechanics/tyre fitters offer a first class service to the midland motorcycle industry.

Wheel House Tyres also operates a highly successful internet operation and supplies all leading tyre brands to customers throughout the UK and some in Europe.

The decision was made 10 years ago to enter the world of Motocross Wheel Building. From our earliest days in this sport it was evident that the potential was enormous. We established our own brand “SM Pro Wheels” and the rest is history.

Today SM Pro Wheels are one of the leading suppliers of MX Wheels in the UK, Europe and further afield (USA, Canada and Australia).

The build up of our SM Pro wheel is as detailed below: 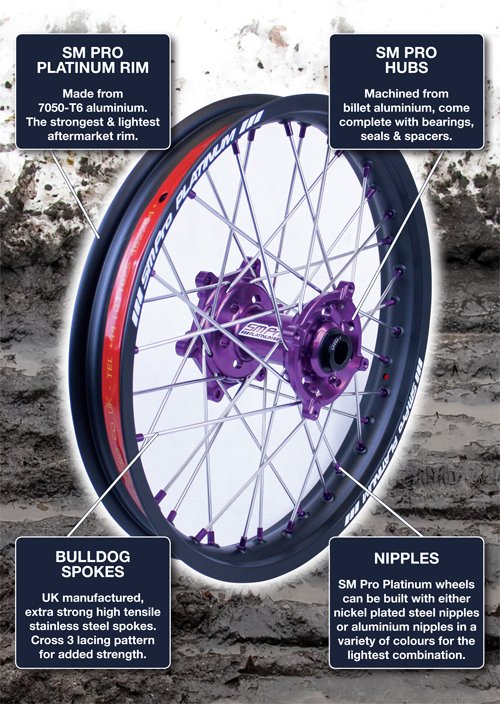 NB. Bulldog “High Tensile” stainless steel spokes are our own “Trade Marked” product, produced in our own Birmingham (UK) factory.